The Thrilling Adventure Hour is a super-fun live stage show in the style of old timey radio that throws down every month in Los Angeles. I've been lucky enough to see it maybe half a dozen times, even luckier to have befriended its creators, Ben Acker & Ben Blacker, and double-plus lucky to be a guest star in last week's sold-out shows here in Brooklyn. Your TV pal and mine, James "Dr. Venture" Urbaniak is just one member of the incredibly talented cast, the rest of whom I've slowly been poaching all year for Venture Bros. voices. Those of you who don't live in LA should check out their podcasts.

And now they're trying to raise funds to publish a hardcover graphic novelization of said thrilling adventures. Which maybe I'll get to do some art for.

Check out their Kickstarter page HERE, give 'em a bit of money, and get some cool schwag.

Have just returned from Dragon Con. Many thanks to those of you who attended our panel and/or dressed up as our most obscure characters and/or stopped by our signing to offer praise and gifts of cookies and robot heads. It is always a sincere and profound pleasure to meet you guys and suck up your groovy kind of love.

For those of you who did not attend, here's a small peek at some of the clips from the Venture Bros. Halloween special we showed at the panel, albeit a non-moving, non-speaking peek with no music or sound effects: 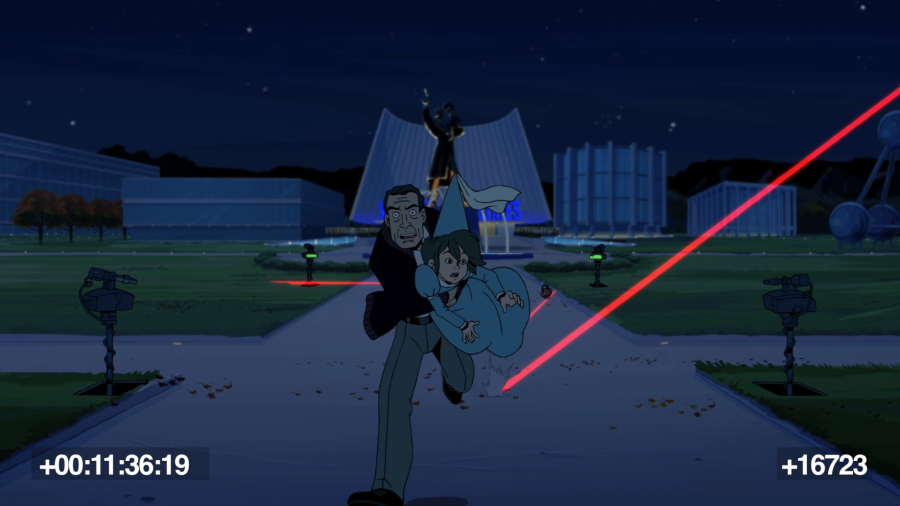 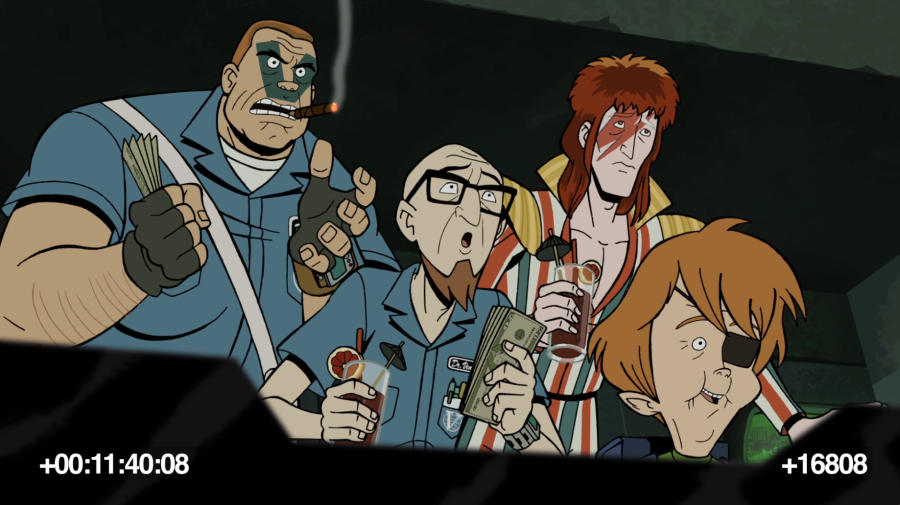 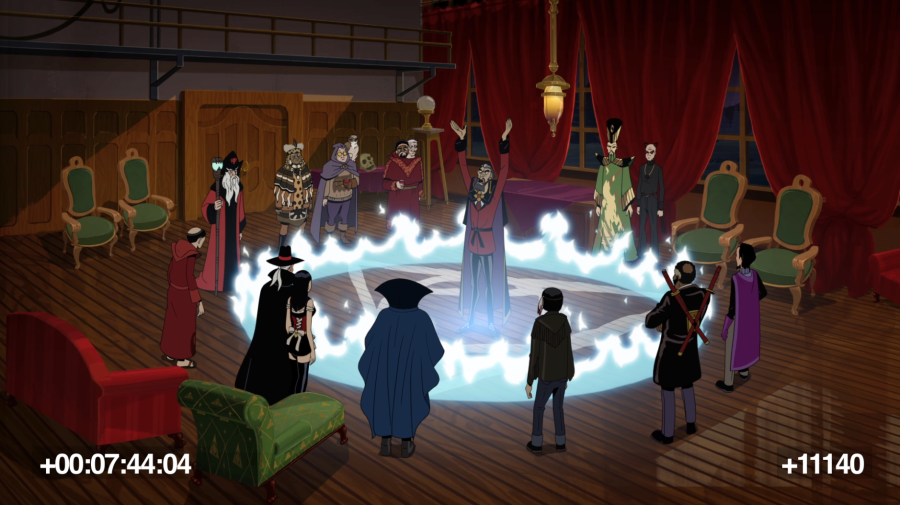 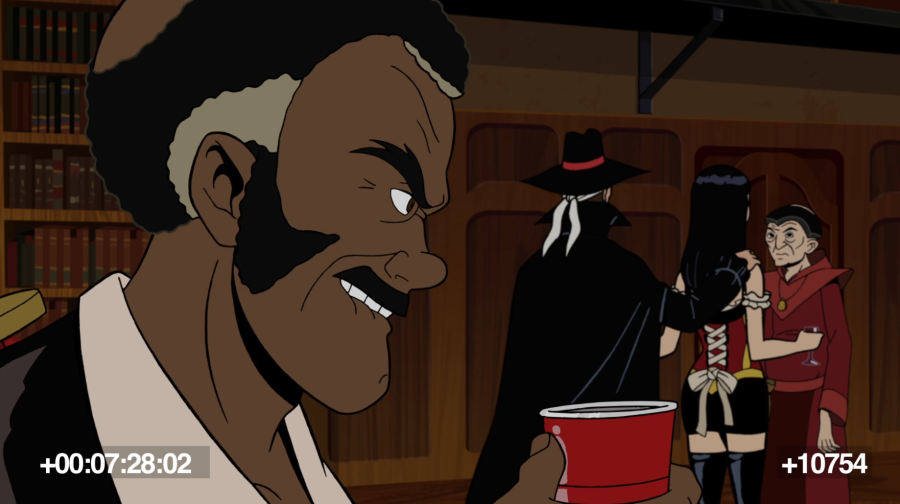 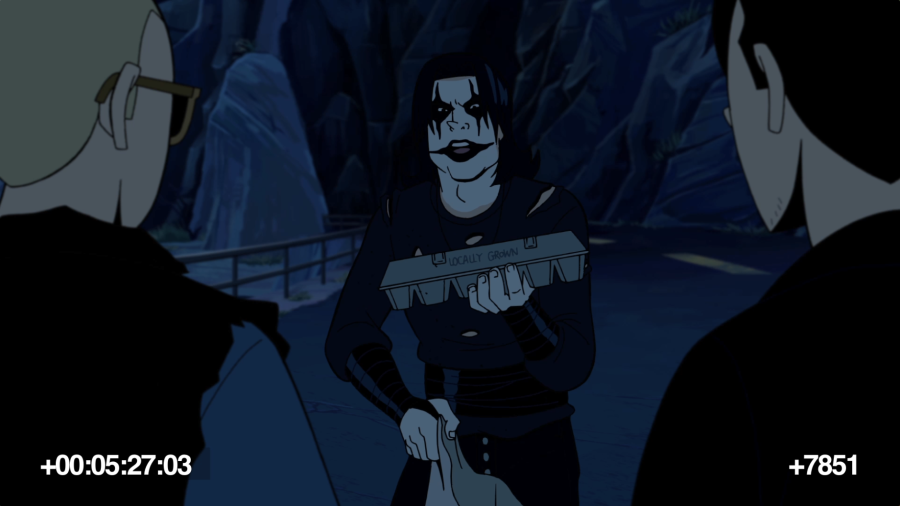 Over at Titmouse East, we're just wrapping up pre-production on season 5 of The Venture Bros. We ship our last episode (which is actually the second half of what will be the premiere episode) to Korea this week. All other episodes have shipped, and all of the art staff (except for few stragglers in the Color department) have gone home. We're received take one rough cuts of the first two episodes from the overseas studio already and are expecting the third this week. Which means we're about to start post-production. The Halloween episode is obviously the first one we'll edit and deliver, since it has to make it's October airdate (the official date has yet to be determined). JG Thirlwell has already completed his genuinely spooky score (we drew some inspiration from the soundtrack to Klute when we first met about this episode a few months ago) and we're just waiting on some animation retakes from Korea before Doc works his magic on the titling and transitions and adds his special sauce to select sequences.

Doc's currently on a train back from Atlanta, but when he returns to the AstroBase, we'll no doubt start talking more earnestly about writing our planned long form special, to be produced some time between seasons 5 and 6. We've already had a lot of "big idea" discussions about season 6 as well, so I'm hoping we get to work on all of this stuff sooner rather than later and we don't make you people wait 2 years between seasons again. Though, having begun season 5 production in January (having written day and night for several months prior), and having had maybe half a dozen days off in all that time, I'm sorely overdue for a vacation.

Hopefully this relative downtime means I can post some more updates on here in the next month or so, as we get closer to the release of the Halloween special and Season 5. Plenty of sweet art to show you, but it must be carefully reviewed for spoiler content.

P.S. Also: thank you to all the adultswim folks who took good care of us while we were in town. And apologies to the ProV folks. I meant to come see your doubtlessly lovely table but had no idea where it was--nobody ever seems to think I might find a convention program or map handy when I come to these things.

Please take a moment to check out a Kickstarter video from my pal (and occasional mentor) Howard Bloom, a real-life scientist, author and idea man who encouraged and inspired me while I was making the rounds with my Venture Bros. pitch book, some ten or twelve years ago (so this isn't entirely unrelated to The Venture Bros.)

Thanks!
We Love You,
JP

And if the link/video that's supposed to be above doesn't work, kindly go HERE:
http://www.kickstarter.com/projects/1870526265/the-god-problem-how-a-godless-cosmos-creates-book

...so am I, briefly. And I'll be participating in this tomorrow: (CLICK ME...then scroll down for our newest musical masterpiece)

So here are the last couple of pieces from the AstroArchives I'd like to share with you. They were created for two different art exhibitions and require a little bit of explanation, I think...

The first was for a comic-themed show at Maxwell's Maxwell's in Hoboken, NJ, curated by my Super-Pal Karl Heitmueller. Dubbed "Agents of P.O.O.C." (Panels Out Of Context), the artists' mission was to reinterpret one of our favorite comic book panels. Some guys did giant paintings, I think one guy did a stained glass window, etc...

Being a life-long Spider-Man fan, and in particular a Steve Ditko Spider-Man fan, I always loved the little full page backup features he did that taught you all about Spider-Man's powers and what his webs can do and crap like that. I also had recently bought An Ideal Boy , a lovely and entertaining coffee table book of Indian educational charts. I could not help but draw a parallel between these two brightly colored forms of childhood indoctrination and create a mash-up of them. The second one was done a couple years later for the Too Art For TV Too show, printed at about 18" x 24" size, mounted on foam core, and displayed side-by-side with the first in a sort of "procrastinator's diptych." ...And that's all for now. Our annual Venture Bros. Christmas song should be available for your holiday listening pleasure in a day or two. In the meantime, you can enjoy all seven of our previous efforts, collected in one convenient location by clicking HERE!

"Pet My Danger" was my contrabution to 2001's Viva La Monkeysuit! , the third volume of the Monkeysuit (wow, that site's still up?) comics anthology series a bunch of us animation guys self-published together, back when I was still pretending to be Chris McCulloch.

I was living in L.A. while drawing this one (but finished it in New York) and had been in the network television trenches all year writing for The Tick live action series, so I desperately wanted to create something weirder, angrier and more free-form without having to pass it through several rounds of notes from three sets of executives. For some reason, I decided to tackle the "funny animals" genre I so loathe and had a Freudian field day with it.

Yes, The Sluggo Rabbit is basically Brock in rabbit form, and yes, that's supposed to be me at the end. (Editor's note: I stole the title from my friend, the inimitable (and AWOL) Eli 5 Stone. Where are you, Choppy?

Continuing my de-archiving and sharing of old comics work...

2003 was super-busy for me, what with The Venture Bros. Season 1 going into production, so my only contribution to that year's In Search of Monkeysuit (Monkeysuit vol. 4) was this back-cover single-page comic.

The sentiment is certainly a bit warmer than yesterday's entry... it's amazing how getting a TV show deal can cheer a guy up...

No real Venture Bros. news to report, since we're just writing right now and I'm not going to tell you anything about anything we're writing. Except that it's all great. We're set to start production in early January, though, so I guess that's kinda news.

Have been on a bit of a cleaning spree at both the AstroBase and my home satellite Base (AstroBase Ice Cream Ninja) in some sort of procrastinatory "clean home, clean mind" bid for sanity while writing.

While optimizing the Soul-Bots' hard drives I've come across a few pieces of my old comic art, so I thought I'd share some of them with you fine folks, who vastly outnumber the people who bought the original comics or attended the art shows these first appeared in.

First up is "Oh, To Be Super!" A 7 page comic story done for The Bride of Monkeysuit , (under my Christopher McCulloch pseudonym) back in the summer of 2000, which should be evident by its pg. 1 reference to something called a "pager."

(Editor's Note: Apparently I pillaged the Beatles-inspired mustache joke on pg. 4 for "Powerless in the Face of Death" a few years later)