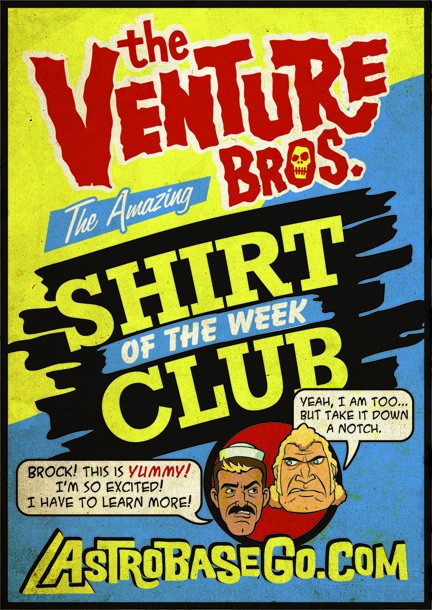 WE LOVE YOU,
JP

After a 5 year hiatus, Astrobase Go has brought back Shirt Club to celebrate the much anticipated Venture Bros. Season 5. Destined to be the greatest moment in animation history (until the premiere of Season 6), Season 5 starts off with a bang, then a shirt comes flying out!

What has improved?
Each shirt is NOW packed and shipped by paid professionals, freeing up interns to learn animation and the fine art of running errands for those who are comfortably on payroll.
Each shirt is NOW less expensive than they were for the first Shirt Club. I know! That's nuts! Does the Astrobase love you more now than they did 5 years ago? Yes they do!
Each shirt NOW comes with $1.00 in official HankCo. Hank Bucks! What are Hank Bucks? It's fake money with Hank's face on it, and it may someday be redeemable for merchandise, prizes, or whatever!

You know the score. Opportunity has knocked twice. You snooze, you lose. Venture fans, this is your proudest moment! You know that Official Venture T-shirts are as rare and beautiful as albinos, and ones created by the actual Venture brothers are even more rare, and like five times more beautiful… What are you going to do? Answer: SHIRT CLUB!

HERE IS HOW THE VENTURE BROS. SHIRT of the week CLUB WORKS:

We'll only print as many shirts of each design as we receive orders for (okay, we'll probably make a couple for ourselves, too) and once the ad for a shirt is removed, that shirt will never be available again.

Venture Bros. Shirt Club shirts will all be printed on only the finest American Apparel shirts available, and each is priced at $20 ($22 for 2XL + up).

This season, we have 8 brand new episodes premiering. Which means we'll be premiering 9 new t-shirts. Wait, what? Exactly! In honor of our hour-long, double-length season premiere (and our general indecisiveness), we're releasing 2 shirts for that episode.

…or, for the frugal completists, True Venturoos and Honorary AstroBase Cadet Candidates alike…

2. SUBSCRIBE NOW TO THE FULL SEASON OF SHIRT CLUB!
For the low, low price of $165 ($180 for 2XL sized subscribers) you will automatically receive ALL 9 Venture Bros. Shirt Club shirts, week by week, as they're produced--assuring you will never ever miss a Shirt Club shirt!

Not only will you save time and money over the cost of ordering each shirt individually, but you'll also receive the "NOW IN GLORIOUS EXTRA-COLOR" BONUS T-SHIRT, ABSOLUTELY FREE. This navy blue beauty features the titular Venture Brothers, our dubiously quotable tag line, and is available to SHIRT CLUB SUBSCRIBERS ONLY, making it the most limited and exclusive shirt. Did we mention it's FREE with every subscription?

SHIPPING
All Venture Bros. Shirt Club shirts will be shipped via First Class U.S. Mail. Domestic shipping is included in the price of every shirt. For international orders, a $9.00 (USD) surcharge will be added to the price. Please allow 2-4 weeks for delivery.

REFUNDS/EXCHANGES
Shirt Club shirts are non-refundable and we do not accept exchanges (we're seriously too busy making a TV show to deal with all that paperwork).

PROBLEM?
In the unlikely event of a screw-up on our end, however--say, we send you the wrong size or something--we will of course exchange the offending item for the proper one, at our expense. Please contact us at VBShirtClub@titmouse.net to alert us to the problem, and someone will get back to you a.s.a.p. This email address is only for Shirt Club members and staff to conduct official Shirt Club business, however. Please do not send fan mail, hate mail, questions about Dean's hair, Hatred's tits, or requests to "bring back Triana's hot friend" to this address.

CANCELLATION
The Venture Bros. Shirt (of the week) Club doesn't want you if you don't want us. So if you unwisely choose to opt out of your subscription, we will grudgingly refund your money minus the FULL REGULAR PRICE ($20/$22 for 2XL/3XL) of any shirts that have been produced up to that point--and you will NOT receive your super-limited edition subscribers' exclusive "Glorious Extra Color" t-shirt. Because the bonus shirts are shipping last this season. Because bonus shirts are for closers. The loyal, the hearty, the "in-it-for-the-long-haul" super-fans. When you wear one, this is how people will see you.
Subscribe
Previous
← Ctrl ← Alt
Next
Ctrl → Alt →

If I subscribe for the whole lot, can I pick and choose sizes with each shirt? Or must they all be the same size?
I ask because I'd like to have some for my wife and some for me.

Can we get a bongus shirt for the trivia thread members!?!?!?!

I know I won't be missing Shirt Club this time, in fact I might just spring for a friend's birthday present.

Last year he gave me Sharky's Machine on DVD and a pack of Nickle Nips.

Have heard nothing but great things about how the event went off last night. I've been told we'll all love the Episode. Congratulations!

Greetings Venturoos, Your Girl on The Street Reporter, Katie "Scoop" Timoney here! I was very fortunate to be in attendance of The Venture Bros. Season 5 Premiere: "What Color Is Your Clean Suit?" At Cinema World in Melbourne Florida. A Special thanks goes out to the Theatre and to John McDonald for making the whole thing possible, because boy, was it a lot of fun!
I arrived about two hours early and went to the front to pick up my vouchers. I cannot tell you how excited I was when I saw the poster advertising it, I mean, in three hours, I'd be seeing New Venture! After giddily receiving my seat and snack voucher, I entered the theatre. To my surprise there was a Monarch Henchman taking tickets. I looked around and noticed that the entire staff was dressed as Monarch Henchman. It was a nice touch.
seeing as I was super early I ran into John, who I chatted with breifly and got to look at the set up, which included a life sized H.E.L.P.eR., action figures, and several items made by Cinemastery studio. So far there were only three people there for the screening and they were seated outside the theatre. I chatted with them and found out that they happened to be Venture Home News Readers, and had recently won some of our prizes. That was pleasant. I went around and got my concessions which were all covered under my voucher, and tried to take pictures.
Eventually the theatre doors opened and the small line that had formed entered. I continued to go in and out to take photos and chat with people. I was happy to get to see several friends from Dragon*Con, including, John, Lady Lomax, and Susan Blix. As well as a good assortment of cosplay. There was of course The Monarch and Dr. Mrs, a Dr. Venture, SPHINX Brock, Brick Frog, Nikki Fictel, Dr. Girlfriend, Crossplay versions of Shoreleave, Sgt. Hatred, and Pyjamed Hank , Hank and Dean, Henchmen, and Joanie Mars dressed as a Queen Amidala version of Dr. Mrs The Monarch. I was quite impressed
Another nice touch was the Venture related trivia before the screening started. There were questions such as: "Before they became an organization for Supervillany, what was the purpose of the Guild of Calamitous Intent?" Answer: To Protect the Orb.

Finally after everyone had arrived, the raffle began. Prizes included Production art, Brock action figures donated by fellow fans, and gift certificates for Famous Faces and Funnies, a local comic book store in Melbourne. Prizes were delivered in typical raffle fashion by Hench person 46, to the lucky winners. After all the prizes had been given out to the lucky winners, the screening began.

We started by watching the season 4 finale "Operation P.R.O.M." if you are able to watch it prior to the season 5 premiere, I highly recommend it, because the beginning of the premiere is the morning after "P.R.O.M." Not to mention, it's just a brilliantly written and hilarious episode in its own right. I hadn't watched it in a while and found myself laughing as though it was the first time I'd seen it. Let it be of note that this was the first time I'd heard the explanations of what a "Rusty Venture" was uncensored. That was... colorful...
After "Operation P.R.O.M." ended we went directly into "What Color is your clean suit?" I won't give any spoilers, but I will say this: some of the Questions brought up after the Halloween episode will be answered, we will be introduced to several new characters, and see the return of old faces, and as always there will be a wide array of pop culture references and call backs to earlier episodes. I will also say, It was amazing.In addition to the movie every one who attended was given a free Venture Bros. poster from Adult swim. It was a great night!

This is Scoop Timoney signing off, enjoy the official Premiere of "What Color Is Your Clean Suit" Tomorrow at midnight on Adult Swim, and don' t forget: GO TEAM VENTURE!